Hiroshi Nakamura is a Tokyo-born architect known for his edgy and breathtakingly bold buildings and temporary installations. Established in 2002, Nakamura’s interests lie on the revolutionising of cultures, notably on urban developments. A 1997 graduate of Meiji University, Nakamura now thrives as the founder of Hiroshi Nakamura & NAP Co. Ltd.

Nakamura’s famous creations are mostly Japan-based. They include the riveting Ribbon Chapel (2013), light trickery piece Optical Glass House (2012), and Tokyu Plaza Omotesando Harajuku (2012), which is used as a relaxing lunch spot for Tokyo residents and has been lovingly dubbed ‘Omohara’. Though his works are typically modern and somewhat futuristic, one of Nakamura’s best pieces includes Lath House (2018), a 9,150 Sq. foot setting inspired by a traditional Japanese oasis. 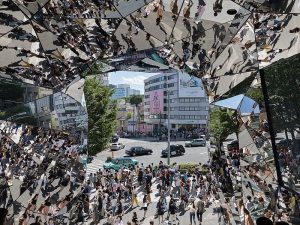 Tokyu Plaza – The kaleidoscopic design of this landmark pays homage to the mirror glass-covered ‘central apartment’ that once stood in its place.

Oasis, peace, and tranquillity are obvious themes executed by the architect, alongside the idea of establishing a sense of calm amongst the hustle and bustle. Interestingly, Nakamura has spent many of his recent days working on the extensions for Tokyo International Airport (Terminal 2), designing every aspect from the shops to the seating, walls, lighting, and more. The diversity of his projects show he is both an inspiring artist and functional but wonderful architect in his own right.

I think the era of 2-D construction by taking photographs and making outdoor sketches to advance the design is over. It is now necessary to design in 3-D. Hiroshi Nakamura 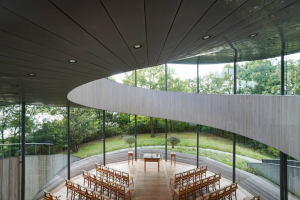 Inside the Ribbon Chapel. Photo by @ta_art_walker.

Nakamura takes metropolitan properties – such as hotels, inns, and museums – and gives them a surrealist spin. His simple yet stunning sculptural designs have won many prizes, including The Japan Institute of Architect’s Award and the JIA Award in Excellent Architecture. He featured on Netflix’s The World’s Most Extraordinary Homes (Japan).

Check out the Optical Glass House.