Affordability and homelessness in Melbourne

The gist: Homelessness in Melbourne is on the rise. Housing affordability, once again back in the spotlight, is a big part of the issue. Although we’re trying to build our way out of it, the real answers may lie in reforming stamp duty and more radical policies around our empty homes.

It’s back. Millennials are once again gathering in circles and discussing when the next housing bust is going to come, so they can have another shot at buying a home.

Housing is now considered a wealth creation tool, not a human right.

But if Millennials are struggling, where does that leave society’s most vulnerable?

“It’s not a house it’s a home, a man’s home is his castle” –  Wise words from Aussie classic The Castle Serenity GIF – Tenor

Although serious problems a few years ago, they took a temporary pause with various government measures announced in 2020 in response to the pandemic. These included housing the homeless in CBD hotels and moratoriums on housing payments.

As public housing demand outstrips current or predicted stock, people are forced to seek affordable housing elsewhere, such as old or near dilapidated homes. However, due to a rising housing market, middle-class young professionals are renting these in an effort to save a deposit to enter the housing market. In other scenarios, they are being purchased by first time developers (inspired by the Block’s house flippers) for a quick pay day.

The primary driver of homelessness (in Melbourne’s west) is the housing crisis. – A 2019 Victorian parliament enquiry into homelessness.

So houses that were traditionally used by society’s more vulnerable, are now highly sought out by others.

In theory, yes. If we imagine a model where supply consistently exceeded demand, house prices could be more affordable, allowing more younger buyers to enter the market. As a result, those seeking public housing (including community housing providers) could have less competition and more options in the open market.

Research by the Grattan institute suggests we need to be building an extra 500,000 homes in a decade across Australia – equating to roughly another 150,000 in Victoria – to see housing prices 5-20% lower than they would have otherwise been.

The construction industry already enjoyed a boom for much of the last decade and prior to the COVID-19 pandemic it employed nearly 9% of all Victorians, contributing $21.6 billion to the economy every year. However, even at its peak in 2018, there were only 58,000 dwelling approvals across all of the Victoria. This has been on a downward trend since then.

The 2019 parliament enquiry into homelessness in Victoria found:

Sufficient long-term affordable housing will both prevent homelessness [and] responding effectively to homelessness when it does occur.

As a more direct solution, the Victorian Government recently announced a $5.4 billion “Big Housing Build”, which aims to create over 12,000 homes in four years. The majority will be social housing, with only 2700 homes are currently in the affordable housing or market-rate allocation. In many ways, a drop in the ocean. 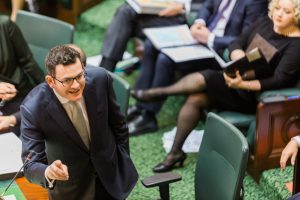 What about all the empty houses in Melbourne?

Most of the investment properties are used infrequently or held for optimal market conditions to sell, all whilst collecting dust for most of the year. With the pandemic’s impact on travel, homes that turned into short term rentals for tourists and the wealthy through Airbnb and Stayz are also largely vacant. 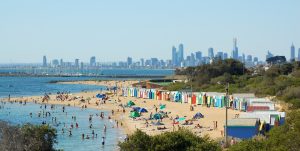 Melbourne’s Beach Box prices are hitting the $300,000 mark, despite no power and being only 3 meters wide. Photo by Nicole Paton.

The government has taken somewhat shaky steps to combat this issue. In 2018, they announced a vacant residential property tax (VRPT) which would apply an annual tax of 1% of the property’s capital improved value (as opposed to market value) if they were left vacant for more than 6 months of a year. Possibly enough incentive to get in some renters, however, it comes with a string of exemptions and problems, the largest being that it is self-reporting. Other notable exemptions include holiday homes, city units for work, properties in deceased estates or legitimate temporary absences.

Are there any other solutions?

The Catalonians of Barcelona are known for being a progressive, smart city.

They have recently proposed a new measure to combat empty houses. The government can now force the sale of empty properties with compensation of half their market value.

These purchased properties would then be rented out as public housing to those on low incomes. This may be too radical an approach, however it could find place in a policy of last resort.

In Helsinki, Finland there were around 18,000 homeless people in 1987. That number is now down to 6,600, who are mostly living with friends or family. It’s is the only country in the European Union where homelessness is decreasing.

Their government built policies on a “Housing First” principle. Like many progressive, somewhat radical policies, the answer is quite simple. Give people homes when they need them. Occupants are also supported by learning skills, training, education, work or help with addiction. Instead of requiring the most vulnerable to tackle addiction, get a job and rejoin society while living on the streets, the Finnish are giving them the stability, structure and framework to be able to rejoin society. 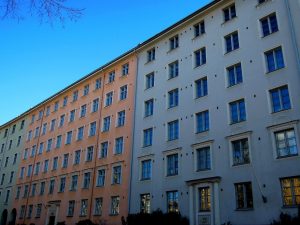 There have been suggestions to abolish stamp duty in Australia in favour of a land tax for many years. Instead of the average house price paying around $48,000 in stamp duty, homeowners would pay a certain percentage every year which would vary on location, and size of the home.

While this may seem unrelated, stamp duty can put off potential sellers. This means you could find downsizers (a couple after their children have moved out of the family home) living in a much larger house than necessary.

New South Wales recently announced proposed changes to their property tax, where people could be given the choice between paying a higher annual tax instead of the lump sum stamp duty.

Each culture will have their own roadblocks and challenges to face in creating an equitable and fair society to live in. It is unclear which, if any, of these measures would work best in Melbourne. However what is clear is that the current system is not working.

If the UN and most of the modern world deems housing a fundamental human right, maybe Melbourne can lead the way by using empty homes and stamp duty reforms to solve its affordable housing crisis.

As the cultural capital of Australia, we need to consistently innovate and ensure all Melburnians have their very own castle.

Co-living: what’s it all about and will it take off in Melbourne?

Is the real estate industry ready for flexible working?