Balkrishna Vithaldas Doshi, known as BV Doshi, is one of India’s most prominent architects. Born in Pune, India on August 26 1927, Doshi attended the Sir J.J. School of Architecture in Bombay (Mumbai).

In 1950, Doshi travelled to London where he met the famous French architect Le Corbusier. The two worked together for five years during which time Doshi returned to India to work on several of Le Corbusier’s high profile projects, including the Mill Owners Association Building and The Villa Sarabhai. In 1955, Doshi set up his own practice in Ahmedabad and began creating work under his own name.

Life insurance corporation housing, built in Ahmedabad and completed in 1973. This is one of Doshi’s early housing projects. The site consists of a series of three-storey terraced homes which provide accommodation for several generations of the same family. The houses use crisp modernist lines and are painted in a series of bright colours to help give them some individuality. 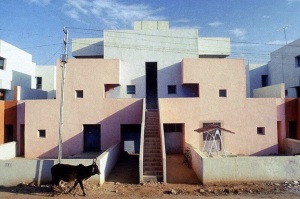 Aranya low-cost housing in Indore. This is perhaps Doshi’s most notable work. The project was conceived in 1989 to create 80 low-cost urban homes for the city’s workers. Resisting the temptation to build high-rise apartments, Doshi opted instead to create a series of two-storey villas located in communal grounds which could be personalised by residents.

Amdavad Ni Gufa, Ahmedabad, The stunning art gallery was built in collaboration with Indian artist Maqbool Fida Husain. The result is a stunning underground building which showcases the art and hosts a sociocultural area for the local community. The gallery also showcases crafts made by the local community using waste materials. 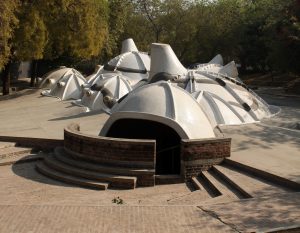 I hesitate to call myself an architect because the more I think I know what architecture is, the less I feel I know about its true calling.

This quote perhaps sums up Doshi and his lifelong journey to create some of the most compelling architecture in India. His style can be categorised as modernist, influenced by Le Corbusier, but it often takes on more organic forms dictated by the local climate and nature.

As India’s first Pritzker winning architect, his legacy is assured, but his work will be remembered for its unique ability to interconnect architecture and nature, thereby creating compelling buildings which are a joy to look at and wonderful to live or work in.

Read more about the Indian Institute of Management, Bangalore.