Roy Grounds was a leading architect in Australia’s modern architecture movement. He was most well known for his ideation of the Roy Grounds House. The structure is seen as one of Ground’s greatest feats, and one of the greatest works in Victoria, Australia at the time.

He is most well known for his design of structures such as the National Gallery of Victoria, Medley Building, the Robert Blackwood Hall of Monash University, and the Swan Hill Pioneer Settlement and Folk Museum Expansion. 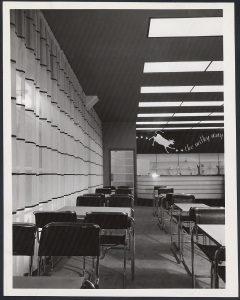 The house Grounds built for his wife and himself, the Roy Grounds House, is celebrated as one of the greatest works of modernist domestic architecture in mid 20th century Victoria. It was a time of extreme experimentation, and Grounds soon after was colloquially named one of the most influential modern architects in Victoria, Australia.

Architecture to me grows out of living a full life and of understanding life and human beings. Any building which is a creative building is a personal expression of a point of view.
– Roy Grounds 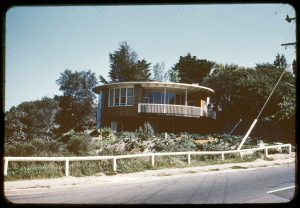 The house depicts a circular glass-walled courtyard within a square of solid brick walls. The rooms are divided by radial walls, with four flats behind the house reaching down the block. The first into a single level unit, and the remaining three matching larger double story, two-bedroom units. While it doesn’t have the geometry of a regular house, it includes distinctive features like angled carport walls, small slatted balconies, and a double story window wall.

Below are some of Grounds’ awards and highlights illustrating his impact on Australian modernist architecture: 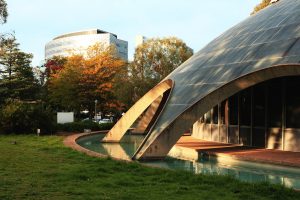 Australian Academy of Science in Canberra

There are no bad clients. The only excuse for a bad building is a bad architect.
– Roy Grounds

Learn more about the National Gallery of Victoria.