As winter approaches and a ‘normal’ fire season is behind us, it would be easy to become complacent for next season. Especially since this little global pandemic has occupied our worry since the devastating 2019-2020 bushfires.

However, communities across Australia are still recovering, and the conversation around how to rebuild in the bush and manage negative impacts of natural hazards is as relevant as ever.

Australian research confirms that climate change effects will lead to significant increases in the incidence of bushfires. With more millennials skipping the city and seeking out rural living environments, are we set up to identify the high-risk areas unsafe for human habitation, and avoid repeating the mistakes of past bushfire recoveries?

In the aftermath of the 2019/2020 fires, planning experts warned against rebuilding communities in the riskiest areas.

They called for state governments to buy back land from people in the most bushfire-prone areas: heavily timbered environments; locations on extreme slopes next to large areas of bushland and forest; and areas with only one road in and out.

If we keep locating people out in these high-risk areas, more property damage is going to be experienced and more lives are going to be lost. – Emeritus Professor Michael Buxton, RMIT. 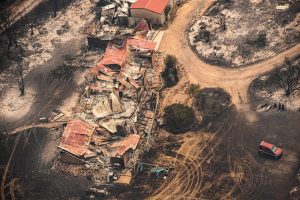 The Australian Disaster Relief Knowledge Hub suggests that in focusing on a long-term approach to rebuilding, more resources need to be allocated to place-based urban planning to reduce bushfire impacts. They also need to provide opportunities for active intervention during the response phase.

There’s an emphasis in Australia on emergency response, rather than taking a long-term approach…which requires a real focus on place and the adaptive capacity of different settlements. 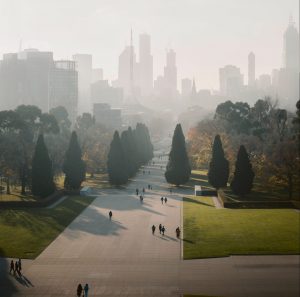 Melbournes cityscape disappeared in the smoke in the 2019-2020 bushfires.

Dr Hawken calls for urban planners and developers to work together with emergency services, to create a holistic and defensive urban design in at-risk areas.

From how we design our settlements, to how we keep them cool, to how we adapt to extreme climate events, there’s more to rebuilding than an emergency response and individualized building codes.

– Consideration of topography, weather and vegetation;

– Density, location and design of structures; and

– The protection of infrastructure.

The principles focus on tactics to reduce vulnerability and create pathways to prevent natural hazards from becoming disastrous.

A large-scale, long-term response would combine expertise to consider everything from city planning policy, to water management, to the make up of the suburb’s infrastructure, the location of public facilities, roads and access points, street character and building types.

As Melbourne’s suburbs sprawl outwards, the urban footprint continues to push into the bush and grasslands.

Questions are being asked about the potential for new fire hotspots to emerge. 80-95 percent of bushfires result from human activity, either accidentally or deliberately.

We must plan and design for having higher concentrations of people living closer to vegetated areas, and the risk this poses.

Increased collaboration between urban planners and emergency services workers has a place in planning for urban sprawl too. At the moment, the Country Fire Authority (CFA) simply considers things like adequate access for vehicles when a disaster occurs, as opposed to the more in depth reviews usually undertaken for higher density metropolitan developments.

Elements like creating adequate space between houses, whilst not interspersing houses with forest or grassy areas; and planning evacuation routes with roads that can handle it are not usually strictly enforced in our planning schemes. New maze-like housing developments on the city fringe with multiple cul-de-sacs provide a good example, as they just need to ensure CFA trucks can access individual areas as opposed to whole suburbs.

To further support these planning efforts, it’s been suggested that enforcing a stronger urban boundary to reduce urban sprawl is needed, along with community education to help households prepare.

However, with many city dwellers looking to move outwards for a quieter pace, the balancing act here is between fire safety and public access to green space – a trade-off between access to nature and living in a concrete jungle.

The role of architects

Architects can help rebuild communities destroyed by bushfire to become more resilient in face of an ongoing climate crisis. But to really have a sustained impact, it will take innovative design and proactive planning.

The role of architects in rebuilding efforts is not just limited to the challenge of looking after human life, but to the long term environmental challenges, too.

The balance of protecting human life and protecting the land is a key consideration of leading bushfire architect, Ian Weir. Since the 2009 Black Saturday fires, Weir has advocated for an approach that emphasises innovative design rather than land clearing.

The issues Weir cites with land clearing is the soil erosion, biodiversity damage and dry microclimates caused by clearing, along with the increased risk clearing creates – by permitting conventional homes to be built in fire-prone areas under the allusion that the more land you clear, the less resilient the structure needs to be.

“It would be fair to say that our existing policies over emphasise the vegetation-clearing side of the argument,” says Justin Leonard, a bushfire research leader at CSIRO who advocates for a balanced solution. For Weir, “blaming the bush” is to fight a losing battle. He instead implores an architectural approach that focuses on carefully designing the elements that can be controlled.

The H (heath) House was designed by Ian Weir. Using a ‘ground up’ approach. Photography by Andrew Halsell.

Founding Director of Architects without Frontiers, Esther Charlesworth, is also scathing of the post-Black Saturday reconstruction. She believes the high-level planning around rebuilding Marysville after the devastating 2009 fires is reflective of continuos failures to include architects is the rebuild planning.

It was divided up – the Vibe hotel occupies half of the town, no thought was given to business development in terms of what business would get off the ground, and there was no great economic reason or stimulus to build on local industry or capacity there. – Esther Charlesworth.

“There are a few really nice buildings, but it’s this very empty, kind of sad place.”

Designing up from the weakest link

When it comes to designing homes in bushfire-prone areas, Leonard says that most people treat bushfire safety as an afterthought – envisioning their ideal home and then changing a few materials to meet bushfire safety requirements. On the other hand, a “magic bullet” approach is equally as inadequate.

The weakest link approach acknowledges that the whole house is only as resilient as its weakest link. This principle has long been used in waterproofing homes, so bushfire-proof windows, doors and roofs, steel walkways and non-combustible cladding would be the logical core decisions.

We need to…move towards the weakest link approach – that is building things that do well passively in a fire situation. – Justin Leonard.

And more than just choosing a range of fire-resistant alternatives and construction materials, the layout designs, the systems being used and other factors such as fencing and access are all key to this approach. As is having adequate clearing around the house, self-cleaning gutters, water storage and ensuring no embers can get trapped in places like the underside of the building. 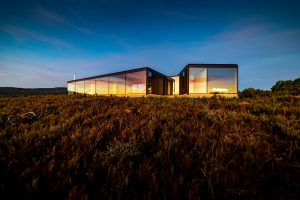 The Apex House, Tasmania designed by Ian Weir. Conceived from the weakest link up, The Apex is airtight, with a flat, noncombustible roof, toughened windows and steel cladding. Photograph by Andrew Scott.

These design and construction decisions would be made according to the Bushfire Attack Level (BAL) – Australia’s means of measuring the severity of a building’s potential exposure to ember attack, radiant heat and direct flame contact. A BAL is the basis for establishing the requirements for construction in different zones.

Many Australian architects have invested time and resources into creating bushfire resilient homes, with Helen Lochhead – President of the Australian Institute of Architects – suggesting that bushfire-considered designs are sustainable, more cost effective in the long-term, and becoming more affordable.

It’s time for researchers [and] practitioners to demonstrate their value in helping to educate, plan and design a better built environment adaptive to future needs. And that’s where architects, planners and engineers have a very strong part to play. – Helen Lochhead, calling for a united response.

Even after a normal bushfire season, we know the situation is only going to get worse.

It’s clear that there is so much more we can be doing to bring together the skills of planners, designers and architects to rebuild smarter and more resilient communities. So we don’t repeat the sins of the past, we need to be become proactive rather than reactive and continually adapt to meet the threat head on.

In dealing with the threat of bushfires, we need to not just minimise risk and avoid disastrous outcomes, but build more resilient communities.

Words by Katia Greenwood for blueprint