Mughal architecture is an Islamic style of architecture that developed during the Mughal Empire, which stretched across parts of modern-day India, Pakistan and Afghanistan. It derives its name from the Persian word “Mughal” meaning Mongolian or Central Asian in reference to descendants of Genghis Khan who established a vast empire across much of Asia. 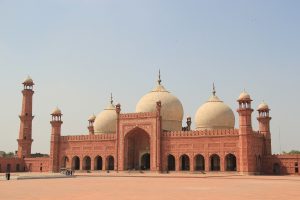 The central features of Mughal architecture are large stone facades with ornate decorations such as small domes, arches and even semi-circular shaped ceilings that form openings or arcades. Typical materials used were red sandstone and white marble. 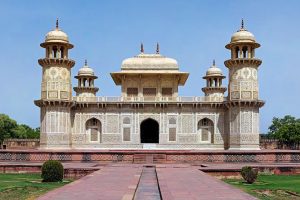 The tomb of I’timād-ud-Daulah is often regarded as a draft of the Taj. Mahal.

Indian architects who brought Mughal architecture to other parts of the world include Abdul Karim and Rahi Masum Khan. The British architect, Edwin Lutyens, famously used this style on many renowned buildings, including the Viceregal Lodge in New Delhi.

The Taj Mahal, considered by many to be one of the most magnificent buildings in the world, is the most famous example of Mughal architecture. 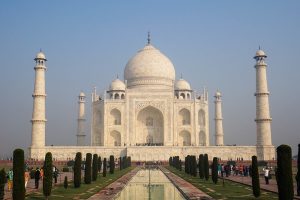 Construction of The Taj Mahal started in 1631.