Postmodern architecture was a movement between 1975 and 1990. Despite originating in the United States with the construction of Vanni Ventura House, its influence spread across the world. Some famous examples include the Binoculars Building in Venice and the Guggenheim Museum in Spain. 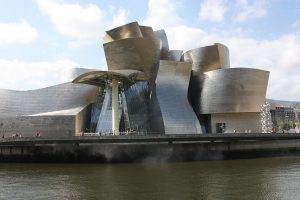 Post-modern structures feature significant amounts of ornamentation, colour, intriguing shapes and, frequently, a sense of fun. From kitsch to neo-classical, post-modern buildings embrace a riot of architectural elements chosen from multiple contexts. Oblique angles, curves and subversion of scales result in adventurous forms that may border on whimsy. In a kick-back against modernist, puritanical emphasis on functionality, post-modernist architects add detail and decoration, “because they can!” 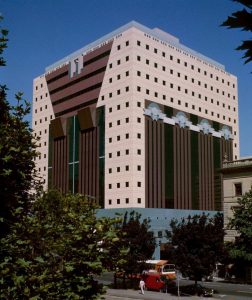 Portland Building was designed by Michael Graves and built in 1981. Image by Steve Morgan, CC BY-SA 3.0.

Adventurous use of materials and a willingness to “mix ‘n’ match” to create unique buildings that charm, bewilder and amuse in equal measure, post-modern styling is adventurous, quirky and frequently flamboyant.

Robert Venturi and Denise Scott Brown were the founders of the postmodern architectural movement. However, other notable names include Philip Cortelyou Johnson, who designed Connecticut’s Glass House through a combination of minimalist and traditional aesthetics. Today, Ricardo Bofill is one of the most influential architects, with his Walden 7 housing complex in Spain inspired by Algerian culture. 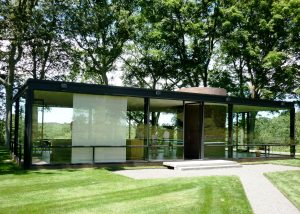 Architect, Philip Johnson, actually lived in the Glass House on and off during his life. Image by Mark B. Schlemmer.